A downloadable game for Windows, macOS, and Linux

THIS WAS OUR LUDUM DARE VERSION OF THE GAME! PLAY THE FULL VERSION ON STEAM AT https://store.steampowered.com/app/1461360/Eggnog_Incorporated/

Eggnog bureaucracy at it's finest. Contemplate ruining your company or the public. If you like Paper's Please, then perhaps this game will be for you. We have no clue, we've never seen or heard of Paper's Please.

Hotfix 1hour after LD. Sounds weren't running correctly. Everything should be in order :)

Hotfix 4hour after LD. Credits were not correcting resetting player variables. Everything should be in order :)

Known bugs
- After Day 6, players can get stuck due to a miscalculation in points during recap. The game was only intended to have 6 days but this bug causes game to attempt to play day 7
- If player submits tray during data downloading phase some screen elements might appear duplicated until a new nog is processed

Wasn’t expecting this type of idea for a jam, a good surprise! I like how the way it’s designed makes so the player, like the employee he is would do, ends up finding speedrunning methods to do his tasks as quickly as possible, that’d be by memorizing the required information or optimizing the transition times and even the display bug that display the next data if you send while it’s loading xD

I liked the humor of it, pretty cool, and the russian accent makes it even better!

The game crashed after the eggnog blogger died though

I’m not quite fond of the way you interpreted the loop theme, I mean these are more or less levels one after another even if yes they are quite similar and such an employee you could say they’re stuck in a routine loop but, idk, I think this not very loop-ish, my opinion though ^^

Doesn’t make the game any less good though, don’t worry! The audio is very good, repetitive but not annoying, like it should be because our position is repetitive.

I tried not listening to the CEO nad doing my job but I got fired :c

Also clever point to make so you can’t have both the classified information and the actual current eggnog infos displayed at the same time, it forces smoothly the player to memorize them, which is more interesting in terms of the intended experience, and makes them faster in the long run!

Congrats for this entry! It was pretty fun ^^ 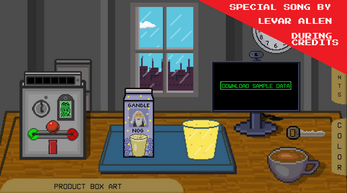 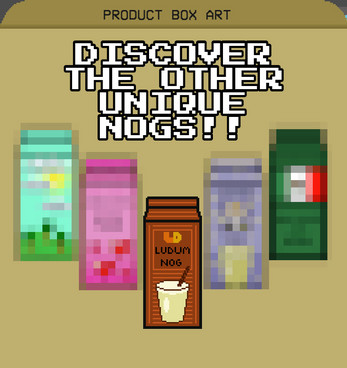 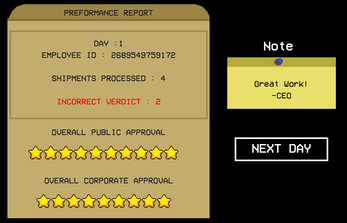